AIMP is a freeware audio player for Windows and Android, appropriately named after it’s Russian developer Artem Izmaylov (Artem Izmaylov Media Player) and the first version of AIMP dubbed AIMP Classic, was released in August 2006. There have continued to be updates since then and the version you are currently running will affect which of the downloadable skins you are able to utilise. AIMP supports more than 20 audio formats and 32-bit digital audio, and it converts between various formats too. You can also customize it with a ton of AIMP add-ons. 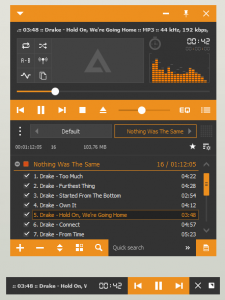 I use AIMP because it really is the best Media Player. It doesn’t compete with other programs on my PC for storage and I can easily house my extensive music collection. I like the skins because they allow me to choose the look and feel of my media player rather than being stuck the well-crafted user interfaces that come as standard on Spotify or I-tunes. This freedom also allows me to design how I see my music and that is a key factor for me.

There is a really wide range of skins available to download for windows including Soot v2.4 which runs on AIMP v4.51 and above. It has dark tone with a horizontal form, a mat surface and a 4K interface. Another skin titled, Smoke and flame V0.1, is compatible with AIMP v4.51 or more recent versions. The form is also Horizontal with a middle tone and a Mat surface. The interface is thematic, and this is one of my go to Skins to use in Windows because of the larger font, flare buttons and simplified equalizer.

AIMP has also managed to cater for Android which is great to see. One Skin available is Deep Purple V1.1 which totally lives up to its name with the visual display. It works on AIMP v2.85 or newer versions, it has a dark tone with a mat surface and the interface is Touch, Thematic and remains one my set of skins for android. Another skin I use is VOID + Cover v1.05 because it gives you one screen instead of two, on the main screen instead of the cover is a playlist. Under the translucent playlist you can see the cover. It encompasses a darker interface with dimmer colors, otherwise the interface is still standard. It runs on AIMP v2.85 and above and has a fantastic touch interface.

This website has a varied collection of skins available for both Android and Windows. It is very easy to use and allows you to search for skins using your preferences for Tone, form, Version of AIMP, surface and interface. You can also download the Skin Editor which among some of its many features allows you to change the icons of the controls, reduces the size of the playlist lines and stretches the window of the equalizer in portrait orientation in the screen.